Skip to content
In a poll of over 100 people from our various music brands, we found out what we pretty much suspected. We are moving towards streaming more than ever. 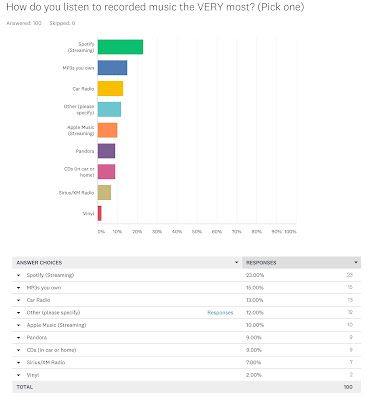 In our poll music streaming dominated the way people listen to music. Spotify itself was the most popular listening method at 23 percent, MP3s you own was second in overalll percentage at 15%, and third place was the venerable car radio, but only at 13%.

However, if you add Spotify (23%), Apple Music (10%), Pandora (9%), as well as those who specified another service such as Youtube, Google Play, or other streaming services (around 10%) that brings the total for streaming to a slight majority of over 50% who answered who listen to streaming the MOST.
More than half of the respondents use streaming services the VERY most to listen to music these days.
Now this may not surprise many of you. Streaming is easy. We’ve always used whatever is easiest. Radio was easier than going out or playing it yourself. 8-tracks were easier than Albums. Cassettes were even easier, then CDs. Then it was easier to download and listen on your iPod or phone. Now streaming allows us to have almost any song at our fingertips that has ever been recorded.
Radio still has a sizeable audience in this poll, with 13% saying they listen to car radio, and 7% listening to Sirius Radio. So that’s about 20% that still listen to radio. Not bad for 100 year old format.
MP3s people own was a respectable 15%, and CDs are hanging in there with just under 10%.
For those of you wondering about the vinyl reawakening…only 2 people out of 100 said they listen to vinyl the most. I heard recently that sales have kind of peaked on that comeback.
With only a hundred responses this is far from comprehensive (as is any poll.) And I also know I asked for what people listen to the VERY most. I actually probably listen to Sirius radio the most (mainly because they have jazz, sports, and classical channels), but also my own MP3s, then Spotify, then CDs pretty much in that order. But usually, to be honest it’s whatever is easiest. If my Bluetooth or USB connects in my car and starts playing my MP3s, then I listen to that. Or if it starts a Sirius radio or podcast I was listening to, then I let that play. Heck, if the jazz radio station is clear of static sometimes I just let that play.
But this survey shows that given the choice, more than half of the respondents prefer streaming these days and the next purposeful choice is far behind.
Minding Your Music Business
For the working musician, composer, or artist hoping to find income, streaming is likely your best choice if not now, then in the future. Rates they are paying are rising all the time. While the music business was at first skeptical (but certainly hopping on board early), they are now seeing profits rise thanks to streaming. The trick will be for independent artists and labels to see this same payoff.
The fact that people are embracing streaming means we have something to focus on. There are tools for getting on playlists, tips on how to make your own playlists, and ways to engage your fans on Apple Music and Spotify.
There are already “middlemen” promoting music to streaming services and playlists.
My bet is streaming listenership will continue to rise…until the next thing comes along.
Have a good week!
—
Music Business Minded is a service of Cre8iv Entertainment, Inc. Find out more about our labels and other brands at cre8iv.com

Are you ready to get your music career started? We offer all the thigns you need ! Click here and get things moving!

Met some great people today who like what we are doing! #recordlabel #musicpublishing #artistmanagement
Here’s our table today at Rosen College! Looking for new interns and team members to help us with our artists and creative businesses! #videographer #videoediting #rosencollege #rosencollegeofhospitalitymanagement
We had a great day in the studio last week with CSRtist Nicole Falgout! Great work Nicole!
Working with that @djgoodfella632! Thanks Cino!

Get Our Free E-Book!